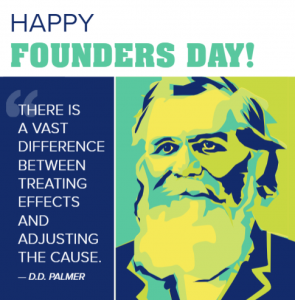 On September 18, 1895, in Davenport Iowa, the first chiropractic adjustment was given by Dr. DD Palmer to a janitor named Harvey Lillard. Harvey had lost most of his hearing 17 years earlier after hearing a popping sound in his neck while he was scrubbing with his brush.

According to tradition, D.D. Palmer heard Lillard on the landing outside his office with some of the other janitorial staff. D.D. went out to listen to Lillard tell a joke. Everyone laughed, and D.D. gave Lillard a friendly slap on the back with a book. A few days later, Lillard came to D.D.’s office and told him that since that time, his hearing had improved. D.D. spent a few more days putting the pieces together.

Then, on September 18th, 1895, he called Lillard into his office. After 30 minutes of convincing, he persuaded Lillard to lay flat on his stomach. D.D. examined Lillard’s back, found that a vertebra was out of place, and gave a sharp thrust with his hands to put the vertebra back into place. Within minutes, Lillard was able to hear the ticking of a pocket watch for the first time in seventeen years. This event led to the formation of the Palmer School of Chiropractic in 1897.

Founders day is a big day for our profession. We feel honored to serve our patients and very thankful for the pioneers that started, established, and built chiropractic over the past 126 years. Without these visionaries, we would not be able to offer the best whole body care the world has ever known.

Font Resize
Contrast
Accessibility by WAH
Call Us Text Us